A Rookie Of The Year Joins The Collection

On Saturday one of the small towns close to our area held one of those entire town garage sale weekends. Not one to miss on a chance to get out of the house on that day, and look for bargains. I made the plan to head on out, and see if I could find anything for the hobby room. First was to convince the daughter it would be fun so it wouldn't be a lonely trip. Letting her know it would be cool so the dog could get out with us, she finally caved in. Ready to head out we loaded up the dog, and were on our way.

Arriving in town disappointment set in as things looked slower than usual. As we drove to the main part of town I had noticed some of the regulars didn't have anything out. All years prior to Saturday finding parking was a nearly impossible task. This year it wouldn't be a problem as only four sales were on the main road. Despite the smaller amount of sales we had success in our first stop. The daughter needed a DVD shelf for all the movies she's had scattered across her room. With a price of only five bucks we bought the shelf, and moved onward.

Seeing nothing interesting we hopped back in the car to decide our next stop. Looking at the map I noticed a sale that appeared to be two blocks away. Not wanting to leave with just the one shelf we agreed to make the small detour. As I drove down the road it became obvious that it was more than two blocks away. With no place to turn around I noticed a stop sign, and knew it meant a cross street. This would be our chance to turn around, and scrap this whole idea. As we got to the sign I noticed a few sales not marked on the map. It looked to be a huge block so we decided to go around, and hit the sales before leaving.While making our way around I noticed a man taking boxes out of a huge shed.

Thinking it looked like a man type sale, and me being a man we had to stop. Looking through the first box was loads, and loads of hot wheels. Having this feeling that something there was coming home with me I continued to look around, and found this goodie. 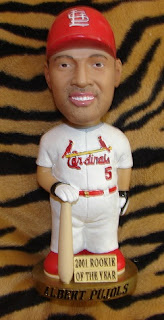 Thinking it looked just cool enough to join the collection I asked for a price. Thinking for a few seconds he spurted out a price of two dollars. SOLD!! As he continued putting out more bobbleheads that all ended up being Blazers. Not being a basketball fan I decided to pass, but saw something else that caught my eye. 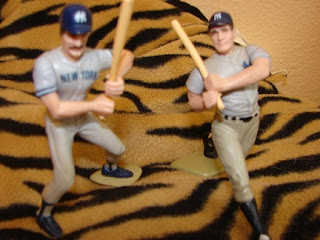 Picking up the Lou Gehrig I had to have it despite not being a Yankees fan. How could I not add such a great player into my hobby room? As I asked for the price of Gehrig he mentioned having a Mattingly that was the same type of figure. Wondering again what he wanted for them he added you can just have both for free. Excited I paid, and we were on our way to the original sales that sparked this detour. Not even stopping as nothing caught our eye we were on the way home to enjoy my finds.
Posted by The Prowling Cat at 2:00 PM