With the MLB all-star game being played in New York on Tuesday I thought I'd take the next two days to give a tribute post to my two favorite players in the card collection. Today's winner is Yankees first baseman Mark Teixeira. With Mark out for the season with wrist surgery, this will give me a chance to keep him on everyone's mind.

Unfortunately Mark has only played in two all-star games during his career. The first was while he was still with the Rangers in 2005. 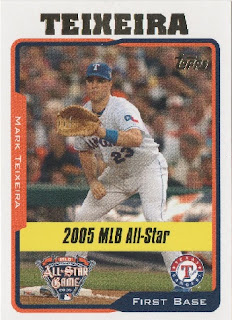 Starting the festivities this season Mark was in the home run derby. He ended with a disappointing 2 home runs, and was eliminated in the first round. During the game Mark batted seventh, and hit a groundout to the first baseman Derek Lee who tossed to the pitcher John Smoltz for the out in the second inning. Coming up again in the fourth Mark hit a pop fly to the second baseman Luis Castillo. Getting another shot in the sixth Tex hit a home run off Dontrell Willis to right center that scored Soriano as well. After the inning ended Mark was replaced by Paul Konerko.

His second all-star game came in 2009 while with the Yankees. 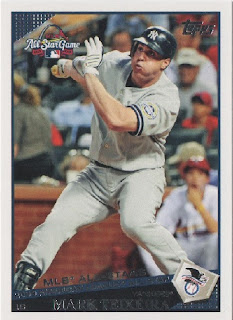 Moving up to fourth in the batting order for this game. This game is one Tex would like to forget. Going a big "O" fer the game. Stepping up in the first Mark hit a groundball, but reached first on an error by Pujols at first. Coming to bat again in the third an unassisted groundout to the first baseman Albert Pujols ended the inning. Stepping in again he hit another grounder to first where Pujols tossed to the pitcher Chad Billingsley to end the fifth. Mark would play first for the bottom half of the fifth before being replaced by Victor Martinez in the sixth.

Despite the somewhat poor numbers hitting wise in his two games. Mark has been very solid in the field with no errors, and 1 assist in the 2009 game. He started at first for both games he played in as well. Hopefully he can get past this injury, and come back strong next season. I would love to see him put a couple more notches in his all-star game belt. It will be tough going as the A.L. is stacked with a ton of talent at the first base position.
Posted by The Prowling Cat at 8:36 AM