After having a great day with bobblepalooza on Saturday I was left wondering if things could get any better. That is when I found out the answer was yes. Arriving home I went out to check the mail to find a lone bubble mailer sitting there waiting for me. Puzzled with what it could possibly be as I don't recall any trades being made. Not having a clue of what could be inside, but thinking maybe schedules from a team I forgot writing. Opening the mailer I found a note taped to a thick piece of cardboard from Duff at Bleedin' Brown and Gold. He apologized for getting these cards out so late. Inside that cardboard were cards that almost completed a couple sets on the wantlists. 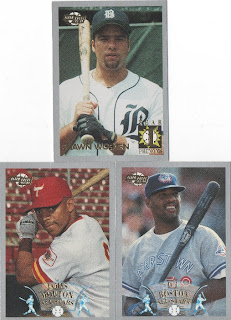 First comes the reason for Excel portion of the post title. Three subset cards for the 1993 Fleer Excel minor league set or actually subsets. Wooten is card #9 for the first year phenoms subset, and drops it down to only needing card #3 to complete this subset. D.J. Boston, and James Mouton are from the all-stars subset from the same year. These two leave that subset only missing card #5 for completion.

Next is the Classic Gold portion. This is a biggie with a name we all know unless you've been hiding under a rock. 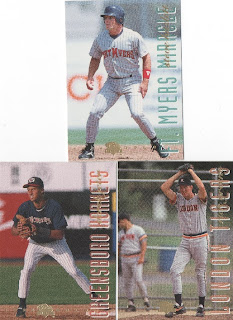 Three big hits that now leaves that set at only one card as well. Look at the lower level, and you will see a young Derek Jeter. Talk about bringing the heat in this mailer. While I haven't looked at the set for awhile I'll bet he is the biggest card in the entire set so getting him crossed of is huge.

Included were two more cards that hit the wants as well. Problem with them is they didn't blend in with the post title, and Duff's blog name. So while I appreciate them just as much as the other six cards. They don't get the top billing like the others because the set name they come from. Those are the breaks when the set you represent is the 1994 Upper Deck top prospects. 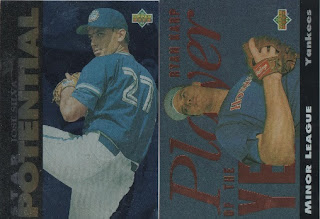 Thank you so much Duff for some big hits to three different sets. Glad to see the computer is up, and running as well. Getting these cards on Saturday was like a cherry on top of what was already a great day.
Posted by The Prowling Cat at 2:00 PM