Going On A BROcation- Saturday

When the plans were coming together for Saturday it had shaped up to become our busiest day. You had a college football game hopefully followed by our second baseball game. I say hopefully as we figured the game would end around two, and then dealing with traffic would kill us. Throw in the start time for our baseball game was six, and it could go either way.

Going in we were undecided on taking the park and ride to the game, or driving up there. Still undecided until Saturday morning when we went with driving up, and paying the crazy parking prices. I personally liked the idea of keeping the car close, and was willing to pay the high fee to make it happen. In the end we both felt it was the best choice.

As we made the drive I had done some research on the parking situation in the area. A habit that the wife has gotten me into by her analyzing every part of any vacation we take together. By doing all that research I thought I had it all figured out, but would come to find out differently. As we made the turn towards the stadium I learned after paying to park that we had turned early. Instead of taking the planned street we turned blocks before I had originally planned. From there a series of football game parking signs distracted me, and next thing I knew we were nowhere near where I wanted.

After the game on Friday, and just thrilled about doing this game we brushed the parking thing off. Making the walk to the stadium we were met with these impressive sights. 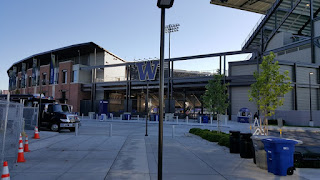 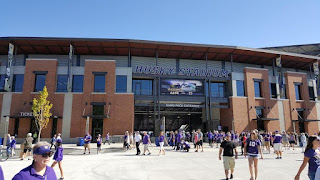 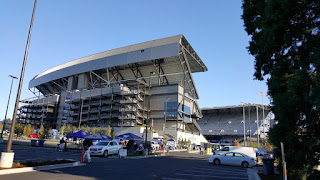 Upon our arrival I had the plan to walk around, and enjoy some of the tailgate stuff going on before entering the stadium. JJ doesn't have the adventurer in him that I do so it took a little persuading to get him to walk around. Finally getting him to head in the direction I was pointing we came across some pretty sweet views. Out of everything I would have to say this was my favorite. 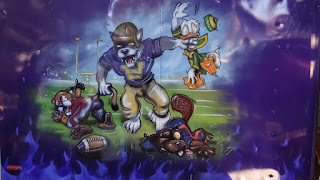 Not a fan of Oregon, Oregon Sate, Washington, or Washington State I thought it was classic, and shared it with the wife who is an Oregon State Beavers fan. Besides the one above there were a few that had both the Huskies, and Seattle Seahawks logo's intertwined. I should have taken a few pics of them, but for some stupid reason passed. After walking around for a bit I was still missing the Husky that I'd seen on the college's website. Doing a full walk around we finally came across the statue. 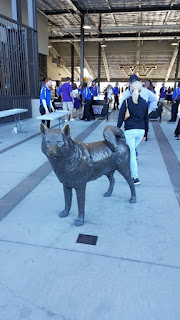 At this time the stream of fans was starting, and it was time to head to our seats. 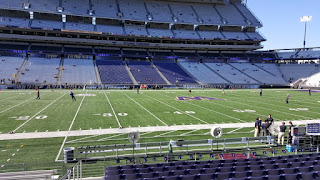 From seeing the picture you'd never know it, but they were entering at this time. Mostly why it looked like this is most the fans were either on the concourse, or at the pep rally thing they had going on. Thinking it looked cool I had to go, and check it out. While there, and before heading to our seats a cheerleader picture seemed cool. 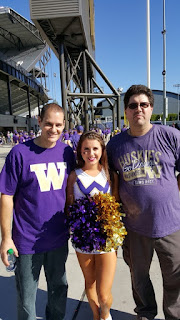 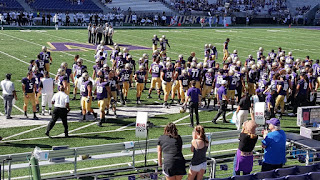 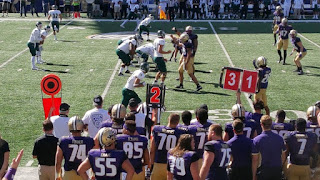 In the end it was Washington 49, and Sacramento State 0. When we bought our tickets this is what we expected to happen. We went because JJ grew up in Seattle, and had never seen Husky Stadium. I'd only seen one college game in my life, and it wasn't very memorable.

Leaving the game we went straight to the car, and found out our luck was still running strong as ever. By being in the parking garage we were in we avoided the entire game traffic problem. Making a right hand turn out of the garage we saw that the game traffic ended on our street. Moving forward instead of turning again we were on our way much faster than both of us ever expected.

An unexpected route, or also known as lost. We somehow went in the right direction though, and arrived at Safeco Field soon than either of us ever imagined possible.

Buying our tickets at the stadium once again we came away with great seats that were seven rows behind the Rockies dugout. 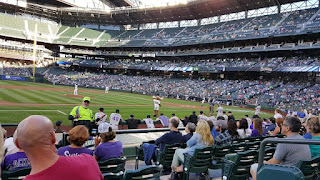 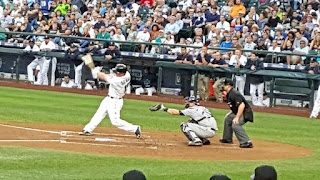 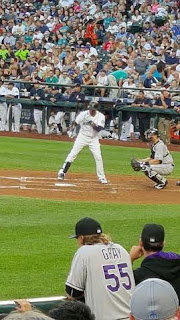 Nothing as thrilling as the Friday night game. Adding to it was the Rockies lost 7-2, and were never in the game. Despite the bad showing by the Rockies it was another fantastic day.
Posted by The Prowling Cat at 6:47 PM