Going On A BROcation- Monday

Monday was a bittersweet day in the general scheme of things for this trip. Part of me looked forward to this day because of the things we had planned. At the same time I was bummed because it signaled the last day of our journey. Tuesday would be spent driving home, and not much excitement at all.

First on the agenda was visiting the card shop. Figuring there wouldn't be much to do on Monday as we waited for the baseball game. I had made the plan to visit a card shop in the area when this trip was just me. Even after adding JJ I still kept this plan. All I had to do was inform him that I was going here, and he could either come along or stay at the hotel. To be fair this wasn't just a surprise as I'd mentioned it to him when we originally made our plans.

After doing a little research online I came to the conclusion that DJ's Sports Cards was my best option. They appeared to have a really good selection of Mariners bobbleheads, and other Mariners memorabilia. While normally baseball cards would be my focus I for some strange reason I wanted other stuff. Best of all they were the closest shop to our hotel.

Waiting until ten minutes before the shop was scheduled to open. Off to our destination that we might have never found if it wasn't for smartphone's, and google maps. Once arriving I went straight to a small box of  buttons. Going through the box I'd hoped for a better selection, but in the end only walked away with these two. 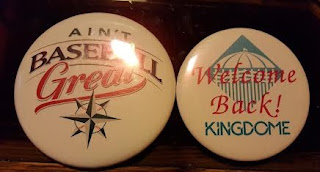 From there the bobblehead search was on. Being the number one reason I was here at first it was a huge disappointment. That is when JJ who knew that was my main goal pointed me in the direction of a stash of bobbleheads. Going through three different areas of bobbleheads I finally walked away with four, and was initially pretty pleased with my results. 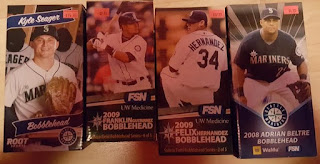 Seager was from the 2015 set, and is one I just had to add into the collection. Guti, and Felix were the final two for my 2009 set. The 2009 set creates a scene of the outside of Safeco so getting these two has been a goal I've been trying to finish for awhile. Last, but not least was the Beltre. I've seen this bobblehead at the coast numerous times for thirty dollars. I was just never willing to pull the trigger at that price. Now I know why I've held out as this one cost just a mere 4.95. Seeing him at that price I couldn't pick it up fast enough as that falls perfectly into my normal price range.

Not feeling quite done yet, but feeling that we needed to leave soon so I didn't bore JJ to much. I started to admire old Mariners posters that were scattered over the walls. Two of them really drew me in, and I had to have them. That is when I spotted a box full of posters on a high shelf with a price-tag of 4.95 each. Getting the box down I went through them, but never found the two. What I did find was this one that I think is a better find than the two I'd originally wanted. 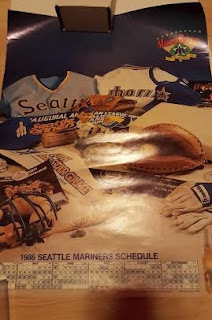 DJ's Sports Cards in the end was everything, and more than I had hoped it would be. One problem is on the way home I started to rethink my spending here. This wasn't the usual I shouldn't have gotten this or that though. The problem was I had planned on spending a little more, and had left two bobbleheads behind. One was the King's Court Felix that I had mentioned to someone before leaving for Seattle as a must have. There he was in my hands, and I had left him behind without any sort of good reason behind it.

With the first leg of our Monday journey complete it was off to stop number two. During the final week before heading off, and during our trip fine tuning. We discussed how cool it would be to do the Centurylink Stadium Tour. Adding the tour sounded like a no-brainer as it would prevent us from just sitting in a hotel room bored. It didn't hurt that we could do the tour then have maybe half an hour wait for the gates to open at Safeco Field for the Angels game. 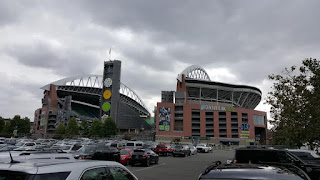 According to the website you need to arrive around an hour early for the tour. This gave us time to wonder the area for a little. It also gave me the chance to spring on JJ that the Seattle Sounders office was within a few blocks of the stadium. Missing a business card for the MLS portion of the collection I had to try. Wandering around a bit it took a little work, but we finally found the office, and got the card. Afterwards we got the beautiful view above, which made it all worth the walk. As for the tour, I'm not a Seahawks fan, but seeing the stadium was an incredible experience. 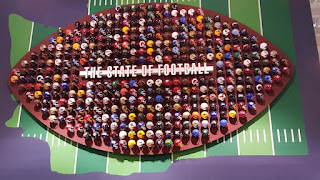 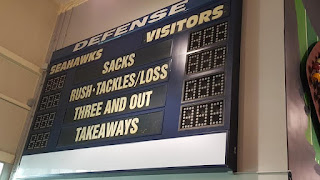 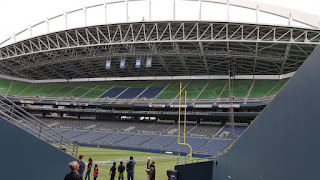 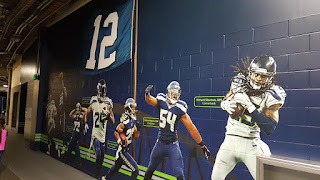 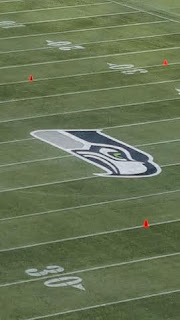 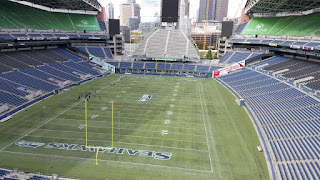 From here we had around half an hour before the gates opened for our final game. Making the slow walk to the stadium we did opted to do the early admission that allows you to the beer selling area of the stadium only. JJ got a burger while I talked to another fan who noticed me wearing my Fresno Grizzlies hat. While talking Cruz hit a ball directly at me that I didn't even have to move for. Looking up a little late I missed it, and watched it drop out of my glove where someone else scooped it up. Never was any good at catching balls hit directly at me so that might have doomed me.

As for the game itself. For the first time all weekend we sat on the home side, and had great seats. With Pujols, and Trout both being right-handed hitters I had to be there for the picture opportunities. 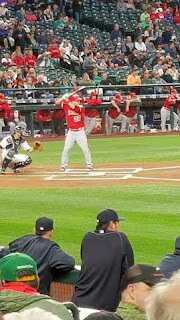 Despite not showing a Pujols picture here I did get some. For all these posts I have only been showing the pictures taken on the phone, and not any from the regular camera.

A special treat was for the second time ever we got to see a challenge. 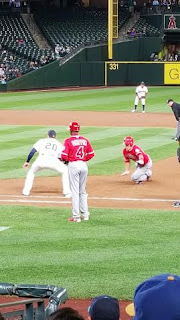 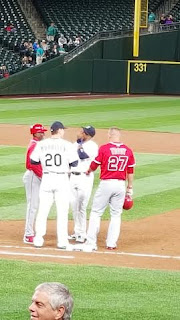 Initially Trout was called safe on this pick-off, but the views on the big screen showed he was obviously out. Seattle disputed the call that was changed to an out after the review. Getting the picture of him coming back was a pleasant surprise that just happened as I was trying to take a picture of him leading off.

The game itself ended with Seattle winning 10-1. The bad part about the game being so lopsided was that both teams started pulling their stars for the call-up guys. I had planned on going hogwild with the camera on Trout, and Pujols during their next at bats. Problem was those at bats never came as both players were part of the superstars being pulled.

In the end our entire brocation was simply amazing. When we were going through the planning process we never imagined it would be this great. Our hope was to have a great time, and watch games from seats that we might never get to sit in. We ended up doing just that, and doing other things we wouldn't normally do. I even think that this will change any trips the wife, and myself do in the future.

One of the biggest is I always make the wife show up close to two hours before the gates open. JJ, and I arrivesd close to the gates opening on every day except Monday, and it was wonderful. There are times like giveaways that we will need to arrive way early. Other than those though I think we will start doing the close to gate opening as there is no reason to walk around for two hours killing time. A change I think the wife will be thrilled to be making.
Posted by The Prowling Cat at 10:27 AM