A few weeks ago I was running an errand at the store, and decided to make a trip down the card aisle. While there I feel victim like another blogger mentioned when these cards came out to the wrong price marking on the Bowman Platinum. Looking over the packs a 5.99 price tag was right above a three pack of these cards. Thinking it would be cool to try something different out I grabbed a pack, and headed to check out. Much to my surprise they rang up at 9.98 instead of the posted price. Not wanting to deal with the whole how do I get these taken off I bought them anyways. Arriving at home I opened the packs, and am glad that I didn't back out. There are some great cards that might be the start of some future player collections. 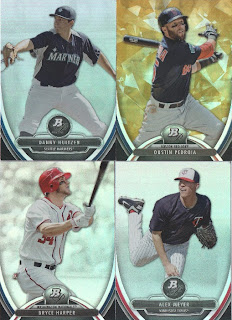 Not a bad start to the three packs. Dustin Pedroia who is an established star. Bryce Harper who is quickly establishing himself as a star, and Hultzen who is hopefully a future star pitcher for the Mariners. Not a bad pack with one card for myself. I was pretty excited about getting my first Zunino who was showing promise before his injury. Hopefully when he returns he can get back to business as one of the Mariners future big guns. The two prospects are unknown to me as I haven't been keeping track of the minors like I usually do. 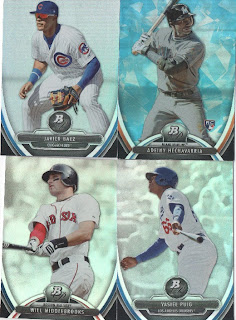 To put it simple this pack was dominated by one name Puig. Overall it wasn't a bad pack, but when Puig is involved everything else is secondary right now. Being a Rockies fan, and we have to compete against the Dodgers. Hopefully he declines at some point. Seeing this guy year after year beating up on my team is going to get brutal. 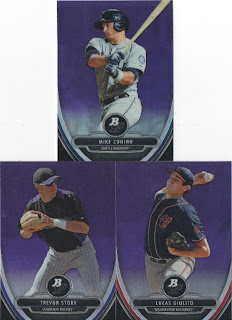 This was a perfect way to finish up this set of packs. A second Zunino for what is starting to look like a new player collection. Throw in a Rockies prospect, and we are looking good. While Story is an OK prospect he does play shortstop. The belief is if he keeps moving through the Rockies system he will learn a new position at some point. Playing shortstop is not where you want to be with Tulo blocking that position.

While I wasn't thrilled with the price originally. Once the packs were opened I was very pleased with the results. I know most people either like or don't like these cards. Personally I am in the camp of enjoying these cards. The bad part is despite this I won't be buying any more packs or trying to build this set. If I come across any cards from this set that interest me at a decent price. They will be finding their way into the collection. Currently they cost to much for my liking, and is why I will go the singles route for any others of interest.
Posted by The Prowling Cat at 5:00 AM