Last night I wasn't going to go to the game. For some reason I just haven't been wanting to go watch any baseball games. Then just a little before five the daughter walked in bored, and wanted to go watch the game. This caught me way off guard as she isn't a baseball fan. So for her to be that bored I thought we had better go. I'm glad we went to watch as it was a great game.

First if you don't know the WCL or West Coast League is a college wood bat league. What this means is the team is kids all still in college who want to play baseball over the summer. It's a chance for the players to show MLB scouts what they can do with wood bats instead of the college aluminum bats they use. There are teams all over the country, and worth going to watch if you have one in the area. They are very affordable to watch, and in some areas are better than the MLB affiliated teams. That honestly is why we started to watch them. The local Northwest teams weren't that impressive for a few years so this was a better option.

Back to last night. This had to be the shortest game possibly in baseball history. Lasting a mere one, and a half hours. Let me say that again, one and a half hours. An average of one full inning every ten minutes. As the league commissioner put it after the game. 'I didn't know they could play baseball this fast'.

There were only four hitters to reach base all game, and two were snuffed out right away. Cruising along until the fourth when Corvallis scored the only run in the game. Leading off the inning with a double he was quickly bunted to third, and a sacrifice fly to center scored him. In the eighth the threat of free baseball was a reality as the second hitter nailed a triple to straight away center. With the next batter quickly going up 3-0 in the count followed by 3-1. Wennatchee attempted a suicide squeeze which ended badly with the runner nailed at the plate on a missed bunt. Striking out one pitch later the excitement was over as all that was left is the final out to end the game.

While to the scoring crowd it might sound boring only going 1-0, and only four runners. There were some incredible defensive plays as both teams brought their A+ game. Overall it was an awesome game that I was glad the daughter got me to go see. 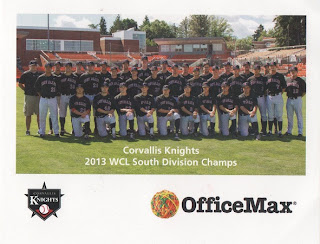 On an interesting note.The free flyer they give out about the game. It had an interesting fact. The league went to the current format of a north, and a south division in 2007. The top two teams play a best of three to see who plays in the Championship. Since going to the format, it didn't say who won 2007. Corvallis has won three times, and Wennatchee has won three times. With both playing each other in most those Championships. Talk about owning the league!

So congratulations to the Corvallis Knights for becoming 2013 WCL Champions.
Posted by The Prowling Cat at 5:19 AM