Seeing the wantlist for mascot baseball cards from each of the Opening Day sets. A person could look at this blog, and think his favorite cards are those of the mascot. While I enjoy the mascot, and collect any cards I can of this fun figure. The truth is the mascot isn't my favorite thing on cards, or at a baseball game. That special honor is reserved for the stadium that the game is played in.

If I had to break down my baseball card collection, and was able to keep only one theme or binder. The binder that I would choose is the one dedicated to my baseball stadium cards. Something about the architecture of the entire stadium draws me in. Every detail from the statues of past ballplayers, banners on the outside walls of the current stars, to the art sometimes placed inside, and outside the stadium. I am just a fan of the entire stadium.

Why am I going off about this love affair with the stadium you ask? Saturday was a great day for additions into my stadium collection. In Beaverton they were having the monthly card show at this location. With the wife going back to work on Friday after being off due to the car wreck. Saturday was my first chance to do this show since that wreck.

Yes, I've done the Mall 205 show across town, but not this show. Even if most of the dealers are the exact same guys at both shows. It is nice to hit the guys who are only at the one show. Sometimes you can get different stuff from the same dealers at both shows. They might bring a new box, or got in some new stuff since the other show.

Heading up I still had to make my ritual stop at the Goodwill in Wilsonville. Even if the hobby room is a cramped disorganized mess right now. Maybe, there could be something that was awesome enough I'd push a bobblehead or something else out the door. What I found is this little treasure that doesn't take up much space, and has already found a spot on the shelf. 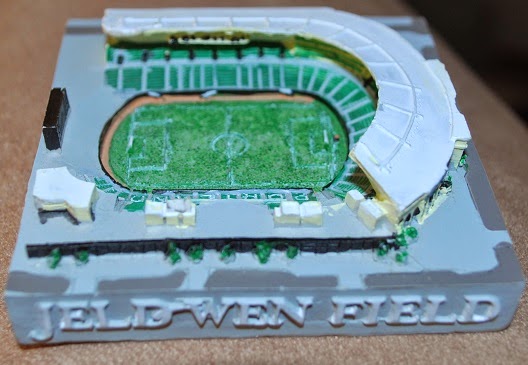 Honestly my love affair with stadiums goes beyond just baseball, and this soccer stadium shows that. I almost missed seeing the thing it is so small. With all the other nick-nacks it kind of blended in with the entire lot of stuff on the shelf.

Once at the show I got right to work on looking through the dime, and quarter boxes. Those boxes are when I found these. 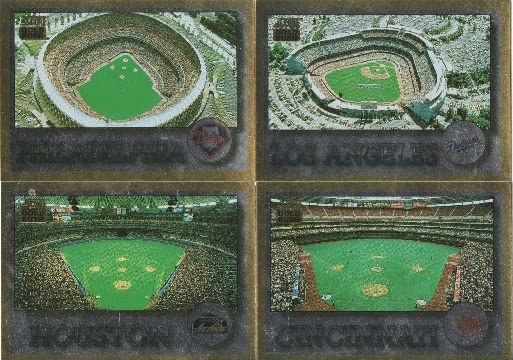 Wish they had more than just the four in the box, but it's a decent start to a new addition on the wantlists. These also fit under that category of stuff I've been slowly learning about since getting back into the hobby. A category that seems to grow every few months, or every time I hit up a card show. 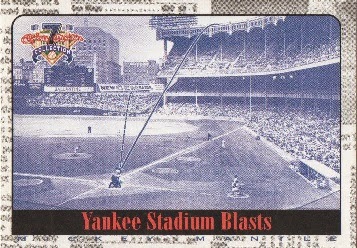 I gave a ton of thought on whether or not I wanted to pick this card up for the collection. In the end two factors went into this card coming home with me. It's a great card of Yankee stadium, and it helped make the dime cards add up to a dollar. How could I not add it with two reasons like that? 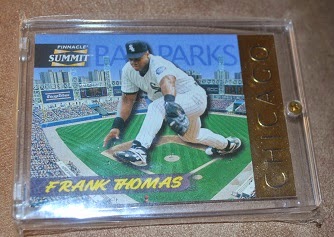 Another of the subsets I didn't know existed is where I found this one Frank Thomas card, and had to bring it home. Costing only a quarter I thought it looked cool enough to buy. Now that I've looked at the card, and studied the checklist. I've added it to the wantlist, but am realistic to know it's a set that will never get finished. With only 8000 of each card, and containing guys like Jeter, and Ripken. When you throw together their collectors, and set collectors. This set is probably on a few lists uncompleted.

All this was just the tip of the iceberg on how great I did at this show. Hopefully tomorrow I'll show the huge find that I got at the same show. Taking the drive up was time very well spent.
Posted by The Prowling Cat at 8:10 AM