There is one thing I have learned in almost two years of blogging. That being some of my schedule posts are usually my least viewed posts. Some of them such as this very post actually are pretty vanilla. Being in a sort of rut right now for things to post I thought what the hell I'll show what I got today.

Hopefully the rut will end soon, but for right now I've been putting together a couple huge business card trades that is taking up all my attention. Once those are done maybe I can refocus on putting together some decent stuff as I was starting to turn that corner before this distraction. Until then enjoy some college football schedules. 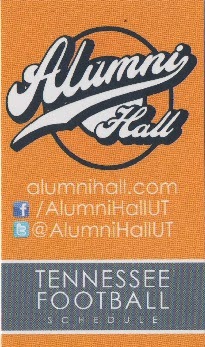 Bob from the schedule trading group I am in was looking to trade Alumni Hall schedules. Not having a clue on what Alumni Hall is, but enjoying the odd college schedules I had to reply. After doing a quick search I have since learned that Alumni Hall is a college sports apparel and other gifts place. Currently their selection of teams stands at seventeen from a few different conferences.

What Bob sent is a selection of four teams, with all four looking fairly close in appearance. The differences are the team colors are on the schedule, and the teams name. 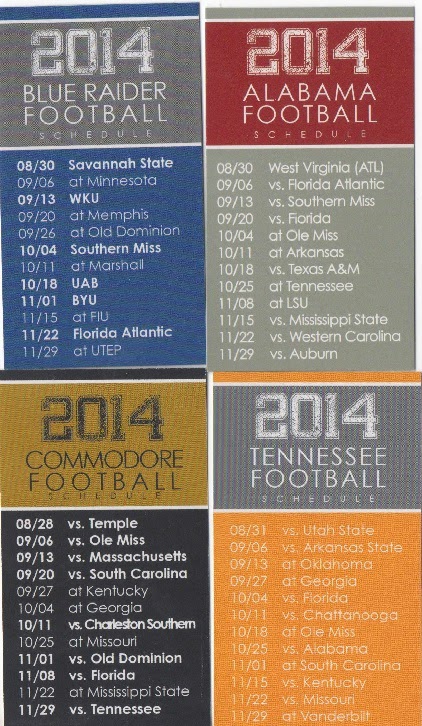 The back's like any cards style schedule has the actual schedule. Nothing fancy, just the information you are looking for on the team's games for 2014.

Currently these are the only known four schedules, but I'd be willing to bet that the other thirteen are either out there or will be at some point. Until then I will just enjoy the four Bob traded me.
Posted by The Prowling Cat at 7:32 PM