Pat Is Definitely No Fool

With today being April Fools Day I have to admit that it's a tradition that is lost on me. I've just never been into the whole thing of playing pranks. Be that on April Fools Day, or any other day to be honest. Don't get me wrong though. I'm not one who will bash others who enjoy the day with a prank. Heck, if a great prank is played I'm one to give props. It is just not something I go in search of any day of the year.

This all leads me to a small package of treasures that I got just over one month ago from fellow TradingBases member Pat. What I learned from this package is Pat doesn't joke around when it comes to sending out some sweet cards.

Included was a note asking if I still collected Tex cards, or if it was a long gone player collection? It seems I have never updated the collecting desires at the TradingBases site. Something that I guess needs to be done in the near future.

While I haven't been actively seeking out Tex cards I still haven't torn the binder holding all the cards apart either. Maybe I'll toss these sweet looking cards in there someplace until I decide if I want to eventually tear it down. Who knows, maybe Tex will get back to his old form minus the injuries he's been plagued with since joining the Yankees.

Closing out the package Pat showed he was serious. 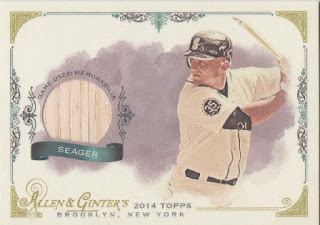 Despite all the player collecting changes I seem to go through each year. Two that have remained a constant is the Kyle Seager, and Mike Trout collections. Both guys will remain in the player wants until the day my collecting stops. Seager has a long term deal with the Mariners that will keep him in Seattle for awhile. He's even considered by many to be the teams franchise player. Some might go with Cano since he's joined the team. For my money I'll join the crowd saying Seager is that man.

Thank You, Pat for some awesome cards that I'm proud to be adding into the collection.
Posted by The Prowling Cat at 1:21 PM