Who Doesn't Love A Good Mystery?

Since releasing their promotion schedule before the baseball season started. Eugene had this logo staring back at you under the promotion for August 2nd. What could be so cool that they were going to make people wait to see what they were giving away?

Then came a few hints during the start of the week. Followed by letting people know that during Thursday's game they would let the cat out of the bag, and announce what it was. Being we live between a half an hour, and a full hour away. There was no hope for me learning what it was on Thursday as work would come calling early Friday. First thing in the morning I headed straight to the team's Facebook looking to see what it could be. Only to be staring back at a screen that revealed nothing, and a comment that only said "I know what it is." The suspense continued until later that night when the website revealed it would be a batting helmet.

Being I had wanted to go no matter what the promotion was, and we needed to do the oil change mention is Sunday's post. The daughter, and I made our way to the game after our other fun side trips. Arriving about twenty minutes before the gate opened we took our place in line, and waited. With the temperatures soaring, and the gates about to open a set of sprinklers came on, and chaos followed. I could see a pretty good group of people all rush over, and start basking in the water, my daughter being one of them. Catching up to me soaking wet as we were about to enter the park, and get our helmets. 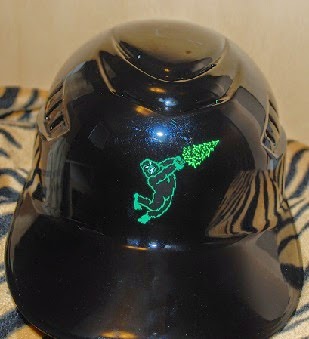 Wanting to wear mine during the game I was denied as they don't fit my head size. They might actually fit, but just not the way I wear hats so I didn't attempt to hard.

Before game-time the Emeralds mascot Sluggo was tearing it up as he started a water fight between him, and the visiting team Everett Aquasox. Normally I'd have a few pictures to share, but I left the big camera at home, and didn't want to take pictures with the phone camera. Kind of wanted to sit, and enjoy the moment without pictures for some reason. I did take a phone shot during the game though 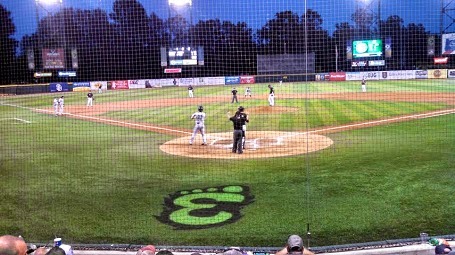 The game itself was great. Both teams hitters came out to play as both team racked up six runs through seven. With two outs in the bottom of the eighth the Emeralds hit a home run to take a 7-6 lead. Closing out the Aquasox in the ninth to send home the fans happy. 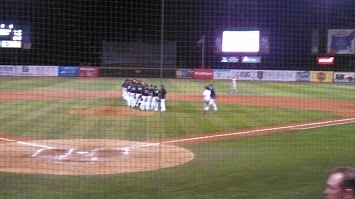