After being gone for what has been over a year now. A great day at the Mall 205 show that gets visited by a few of the other bloggers in these parts ends the streak. For me it has been probably a minimum six months since the last visit. While that one was fairly good this one ended up rating as the second best trip ever.

Things didn't start out well as my usual trip to Goodwill before the show yielded nothing. From there things were a simple OK as I hit Gavin's favorite stop Bill first. Bill had the dime boxes out in full force where I managed to find these treasures 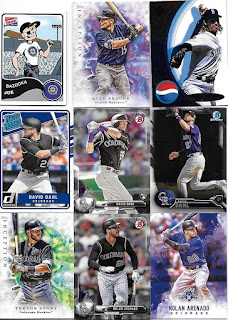 Bazooka Joe fits into my general Seattle Mariners binder. Kyle Seager is one of two Mariners players I collect cards for, and thus fits in that same binder. Johnson was a card I believed was missing in the Mariners Pepsi set, and luckily I was right. What the other couple are I have no idea, but I should make a list for the set at some point.

David Dahl is one of a bunch of Rockies prospects I have been gathering cards of when found on the cheap. For some of the guys on the list a dime might still be a little much, but I really like Dahl so the dime per card  was inside the window. Story, and Arenado are two of my big three that I collect of Rockies players. The third is Blackmon who I didn't find any cards for. 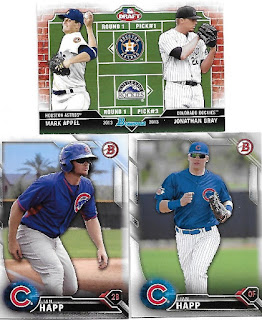 These three were the biggest pick ups of my player collecting finds. The top card was picked up for Jon Gray who can list this cat as a fan for life. When I did the Mariners weekend a couple years ago I got a picture with Gray who was a very cool dude, and sold me as a fan.

Happ is one of those guys in the Cubs pipeline that honestly hits two categories. First is he played for the Cincinnati Bearcats who is one of the few colleges I collect schedules for. Second, and the most important reason is he played down in Eugene, and a player we enjoyed watching while in town. Eloy Jiminez is another of those players despite not having any cards for him right now. 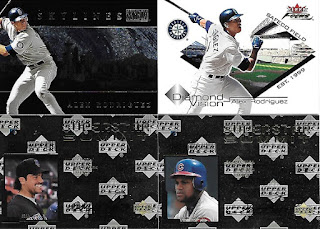 From there the additions were for sets that I am ho hum building. The Skylines caught my attention, and is a subset that I'll probably take a shot at if I ever come across a couple more. The Superstar Summit cards are the same type of deal. Diamond Vision is a subset that I have officially started, and fits in my stadiums binder.

Besides all these another nine cards made it home with me. It could, and should have been more as there was 5 or so more boxes I never got to. Problem is the back started to tighten up, and forced me to move on. I decided against going back as I knew I'd get sucked in again, and not last very long.

Walking around I glanced into a few boxes, but with the back I didn't feel anything was worth stopping until arriving at one of the last two tables. Giving a fast look I almost moved on, but spotted a load of 2014 Opening Day. 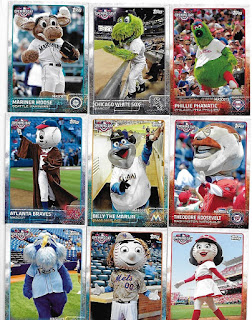 Tucked in there was all the subset cards that they pulled with the packs. Having what I thought was a complete wantlist I got these 9 plus three more not in the picture. Best of all these were 5 for a buck so it was a steal of a deal for cards I never seem to find for even a higher price. Once I got home I noticed that the wants might not be correct so going through the wants might be something that needs done in the near future. 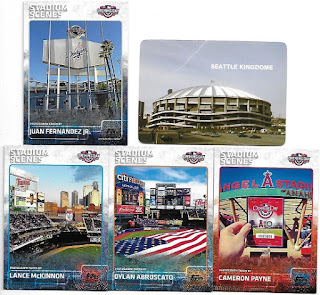 Last was the find that made this the second best discovery at a card show. That will have to wait for part 2 which will hopefully be coming in a couple days, or next weekend.
Posted by The Prowling Cat at 4:59 PM