While the blogging around here has been slowed to a small drizzle this year. One thing that has been going strong so far this year is my card shows. With it only being February, and two card shows at Mall 205 this year. I luckily have been able to hit both shows, a trend that I know will probably end for March's show.

Honestly I wasn't going to do the show this past weekend, but an e-mail from Rod from Padrographs changed things. Rod mentioned that he had some stuff to send my direction as he is doing some downsizing to his collecting.

Meeting at the show Rod dropped a box with bobbleheads for the collection I have. 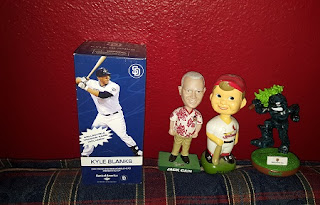 Before running off I talked about the Jack Cain one, and how cool it was to add his into the collection finally. Mr. Cain owned the single A Bend Rockies, and later Portland Rockies. Along with those he had a few businesses that I'd been to when living in Bend. Rod added into the excitement by pointing out it was autographed on the back. While not shown in the picture these have all found a place on their respectable shelf.

When it came to cards this show was much different than the January show. During that show I made some serious strides in the set collecting with most being for the soon to be posted Fleer Team Action football. This show I didn't add a ton in cards, but what I did add were for the player collections. 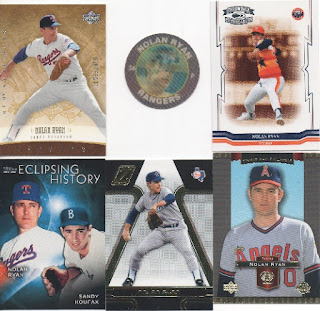 Nolan Ryan is one of those players I don't list on the player collecting. The simple reason is I have most of his cards, and so putting him on the list seems crazy to me. Getting six cards was cool, but I haven't put these into the collection yet. Going out on a limb I'm going to bet that I'm only missing three of these, but at the price I took a chance on all six. 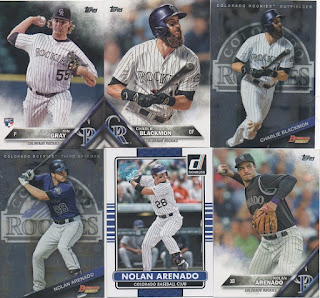 The Arenado collection has been slowly growing, and only grew by two cards as the middle card was a double. Blackmon is a player that after picking up these two I am still toying with adding onto the player list. Gray's card is the first one in the now new Jon Gray player collection. While I should know better than to start a collection of another Colorado Rockies pitcher. I came across Gray at the Mariners brocation this fall, and he seems to be an awesome guy. That interaction has stuck with me, and has led to this new player collection. After a couple Rockies pitcher collections that have been discarded you'd think I would know better than to start a new one. Instead here I am going full force into another. 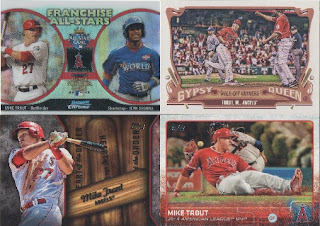 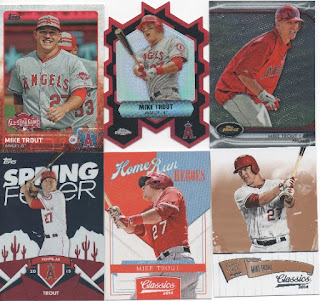 Closing things out were my most expensive pick ups from the entire show. All these Trouts were cards I've missed over the last couple years, and thought why not finally getting them before getting to into the 2016 cards. This same seller had many more, but the cheapskate in me wasn't willing to go for more than the six dollars, and forty cents I paid for all these. Most of his remaining were running at three, or five dollars each.

Overall it wasn't a bad show, and will hold me over until I am able to make the trip north again.
Posted by The Prowling Cat at 1:23 PM