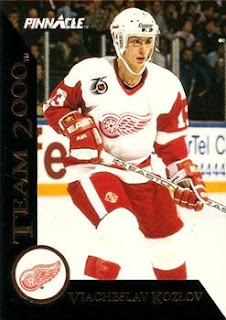 13. Vyacheslav Kozlov -- A Russian born left winger who was drafted 45th by the Detroit Red Wings in 1990. It wasn't until 1992 before Kozlov made his debut. The biggest part of Kozlov's career didn't start until 1995. Red Wings coach Scotty Bowman made Kozlov part of a Russian unit referred to as 'The Russian Five'. The five players were very instrumental in the Wings winning the 1997 Stanley Cup. A second consecutive Cup was won the following year. Playing 18 seasons in the NHL, with breaks to play in Russian leagues. Kozlov scored 356 goals, and made 497 assists.
SUCCESS 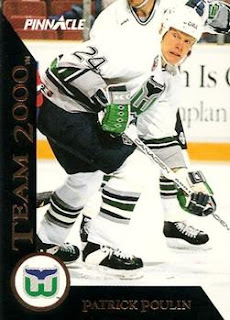 14. Patrick Poulin -- A left winger who played for 11 seasons. Poulin was drafted 9th overall in the 1991 draft by the then Hartford Whalers. During a career with limited opportunities. Poulin only played in 634 NHL games during those 11 years. Only scoring 101 goals and making 134 assists during those years.
BUST 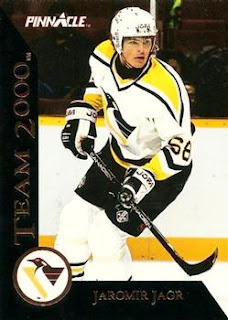 15. Jaromir Jagr -- Drafted in 1990 with the 5th pick by the Pittsburgh Penguins. Jagr came into the league in a big way winning consecutive Stanley Cups in 1991 and 1992 with the Penguins. Those two would be the only Cups he has won during his career. A player who knows how to get the puck into the net Jagr has been the leagues top point scorer for five of his 18 year career. This ability has also put him as the NHL's all-time 8th leading goal scorer. Going with all this Jagr currently hold the records for European born players in goals, assists, and points. Still a current player Jagr is the NHL's active goal scorer. During his time in Pittsburgh, Jagr became the second Penguin ever to score 1,000 points for the team.
For the 2001-2002 season Jagr signed what at the time became the largest NHL contract in history at 77 million for seven years with the Washington Capitals. Unfortunately Jagr had what was his worst season since his rookie year for goals but still finished strong in assists. Another just as weak season followed as Washington was looking to unload what they considered an overpaid bust. The following season a trade partner was found in the New York Rangers.  Playing out the remainder of his contract with New York, Jagr became a free agent once more in 2008. Informed by the Rangers they were moving forward without him. With other offers and a rumor he was close to retirement and wanted to do so in Russia Jagr signed with Avangard Omsk.
Playing three seasons in Russia, Jagr once again returned to the NHL on a one year contract with Philadelphia in 2011. After the season it was time to move on. Signing what is his current contract, Jagr is a member of the Dallas Stars.
MAJOR SUCCESS 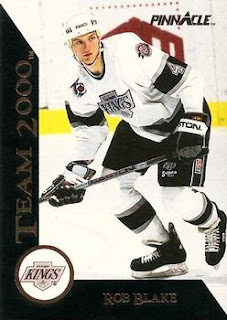 16. Rob Blake -- Drafted in 1988 by the Los Angeles Kings 88th overall. Making his NHL debut during the 1989-1990 season. Blake played 20 years for the Los Angeles Kings, Colorado Avalanche, and San Jose Sharks. In his third season Blake helped the Kings to the Stanley Cup where they lost to the Canadians in five games. Two seasons later hampered by injuries Blake played only six games, but after a trade of Wayne Gretzky was given the teams captain position. Blake kept the honor until 2001 when he was traded to the Avalanche. Despite the short amount of time with his new team Blake helped the Avalanche win the 2001 Stanley Cup. In the off season Blake resigned with Colorado where he played until 2006. A return to Los Angeles followed then a move to San Jose where Blake retired at the end of 2010. Despite being a defenseman Blake had career totals of 240 goals, and 537 assists.
SUCCESS 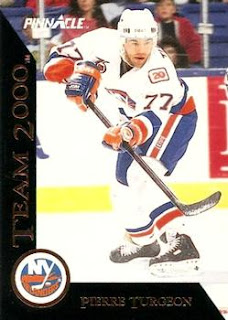 17. Pierre Turgeon -- Another of what I call the cheap additions to the set. Turgeon was an already established player, possibly even star player. Drafted in 1987 by the Buffalo Sabres 1st overall. Starting his career the same season. Upon entering the league Turgeon made an instant impact. Helping the Sabres make the playoffs for the first time in three seasons. The following season Turgeon's scoring increased, and again the next season his points increased once more. Four years into his career Turgeon was traded to the Islanders. Playing with the Islanders for four seasons. Turgeon was on the move again to the Montreal Canadians. Moves to the St. Louis Blues, Dallas Stars, and Colorado Avalanche would follow before announcing his retirement in 2007. The four time all-star played in 1,294 games with 515 goals, and 812 assists. during what was a 20 year career.
SUCCESS 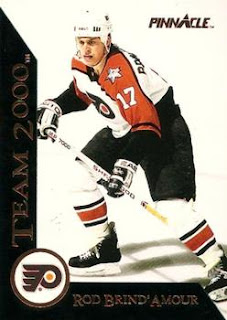 18. Rod Brind'Amour -- The third cheap addition to the set. Rod was on his second team when the team 2000 set came out. Originally drafted in 1988 with the 9th overall pick by St. Louis. Brind'Amour played two season for the Blues before being traded to the Flyers. Once in Philadelphia, Rod became one of the teams most popular players. His reputation as one of the leagues best shutdown centers, and an ironman who played in 484 consecutive games. After nine years with the Flyers Brind'Amour was traded to the Carolina Hurricanes. Playing the final years of his career in Carolina Brind'Amour retired at the end of the 2009-2010. Playing 1,484 games, scoring 452 goals, and making 732 assists.
SUCCESS
Posted by The Prowling Cat at 3:30 PM