Snoop Doug In My Hizzle

Continuing what has been a trend for the last month. Monday is errands and goof off day. Today's adventure was back to go get the wife's present I attempted to get a couple weeks ago. While the call came in late last week that her present had come in and was waiting for me to come over. A combination of going to a Christmas bazaar, and a football game in town prevented me from making a trip over to get it. With all that going on I didn't mind making the trip today as it meant going to some other places as well.

The journey started by getting the wife's present and moving on to the thrift store. Walking in, I did the usual row after row looking for anything that would catch my eye. The look of sadness followed as I left head down and nothing in hand. I couldn't let it faze me as other errands needed to be done. A stop at the grocery store for some goodies, and what is always my favorite stop whenever possible. The stop at the closest Jamba Juice. Oh, how I love those fruit slushies or whatever you'd call them. Taking my juice and heading home with just the goodies I was sent out for. Seemed kind of like a disappointment but hey, I had my juice.

Earlier while doing errands the wife called to tell me a certain store had the movie 'Mr. Magoo's Christmas Carol' on sale for dirt cheap. Trying to find it before going to Jamba and coming up empty was fine. As I had my juice! On the drive home though something happened. The car hit the off ramp and started to head into town instead of going homeward. No problem as there is a Goodwill on the way I thought. Expecting the worst I wasn't to worried as I could take the back-road into our town and get the dog's flea medicine anyways. So going into the Goodwill with very low expectations I headed for the usual sporting good section. Sometimes I can find advertising baseballs there, but that's been getting tougher to find new ones.

Looking through the helmets, and gloves two baseballs popped up but both were trashed. Not too upset by the sight it was time to head down the next favorite row, nick-nacs. Rounding the corner I made the look at the top shelf and there it was. 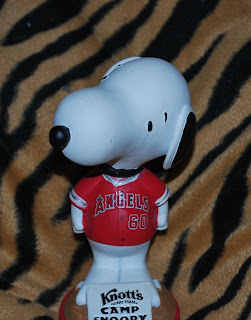 While I'm not an Angels fan. I am a fan of bobble-heads, and who doesn't love Snoopy? It does look like his head might be slightly busted as it's turned to the right instead of straight forward. Maybe it was released that way, I don't know. Either way he had to come home and join my other bobblers. While still excited about the find, I slowly walked on. Giving what was a little more in-depth look at each shelf. Looking deeper to make sure nothing got missed. Thinking to myself that these things seem to come in pairs 90% of the time. Then three quarters down the row sitting on the top shelf my hunch was right. Sitting on the top shelf blowing a bubble was none other than. 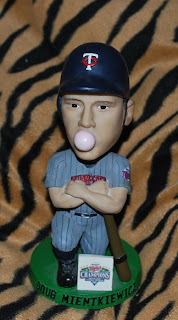 My excitement level was through the roof at this point. Turning it over and expecting to be making a phone call to the wife trying to explain I just found two bobble-heads. My joy hit an all-time high as I looked at the bottom to reveal a $2.99 price-tag.  Score I thought to myself as the phone call was avoided. The kicker is it's labeled on the bottom as #1282 of 5000. Going nuts at this point and thinking I was on top of the world. Always going through every row as you never know what you'll find. Next was the row of glassware. Being we live in Oregon most times you can find those Dairy Queen Blazers glasses from the 1990's. This time was different. 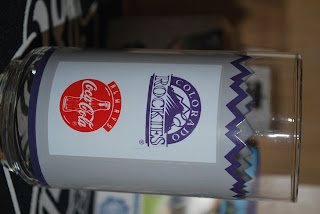 A Colorado Rockies glass from the 1995 Spring Training. As a Rockies fan it had to come home with the other baseball goodies. By now it was time to get out before I stumble across more goodies. I'm not crazy though as I did make one more trip down nick-nacs lane with no results. Overall it was well worth the side trip. I did end up looking for the Mr. Magoo movie and no results there again. It's no wonder I never shop at the store where the movie was supposed to be.

Posted by The Prowling Cat at 4:40 PM