While I haven't been doing this whole blogging thing for a month yet.  From what I keep reading we are currently in the slow period. The time frame where no new card sets will be arriving until the first of the year. It seems that some are scrambling with ideas for posts to get through December. I thought it might be fun to take something I can learn from and maybe some others will as well. So I am going to tackle three sets yet one set at the same time.  Right now you are asking yourself what is this crazy guy talking about three sets but one?

For the month of December I will be going after the Pinnacle Team 2000 sub-sets. The reason I say three sets is I will be attempting to do all three sets that were created. Baseball, football, and hockey are the sets. My plan is to give some information about each player then decide if his career was a success or a bust when it comes to Pinnacle picking the player. For football, and hockey it will be a touch more challenging as stats don't tell the whole story. Let's be honest too. My knowledge of hockey is limited so I might miss out on a few of these players. Everything I get will be from trying to find any information possible from the internet. So if a player is tabbed wrong let me know and why. 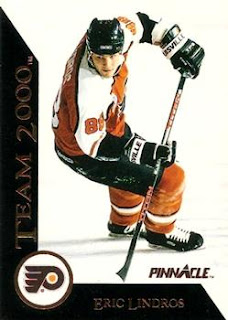 1. Eric Lindros -- Originally drafted first overall by the Quebec Nordiques who later became the Colorado Avalanche.  Eric had stated originally he would never wear a Nordiques uniform. Quebec not willing to trade Lindros vowed he would then never play in the NHL. Later at the strong request of the NHL President, Quebec took trade offers. After arranging two trades an arbitrator was brought in to decide which trade would be valid. Eventually the Philadelphia Flyers were declared the rights to Lindros. The trade is believed to be the reason Colorado has been a powerhouse since then.
Once his career started with the Flyers, Lindros established himself as the teams top player and one of the leagues best. Playing for the Flyers from 1992-2000 Lindros scored 290 goals, made 369 assists, six all-star games, and won many personal awards. Suffering from multiple concussions after 2000, Lindros still played but was traded. Finishing the last few years with the Rangers, Leafs, and Stars before retiring in the 2006-2007 season. Lindros never made the impact he had earlier in his career. These last five season Lindros scored 82 goals, and made 124 assists.  Despite a great career Lindros never won the Stanley Cup.
SUCCESS 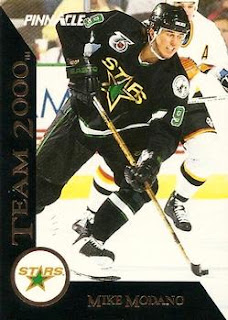 2. Mike Modano -- Drafted first overall in 1988 by the Minnesota North Stars. Modano spent 20 years of his 21 years with the franchise, including years when the team relocated to Dallas. Making an instant impact Modano was a finalist for the Calder Memorial Trophy (rookie of the year). In a controversial move he lost the trophy to Sergei Makarov who had played in the Soviet League for 12 years. This led to a rule change of future winners needing to be younger than 26. An 8 time all-star and one time Stanley Cup winner with Dallas. Modano finished his career by playing one year with Detroit before retiring after the 2010-2011 season. With career stats of 561 goals, and 813 assists, Modano is the all-time American born NHL goal scorer and points leader.
SUCCESS 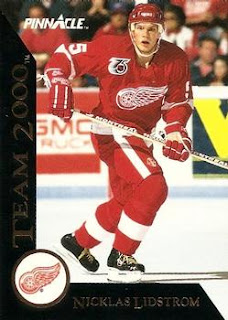 3. Nicklas Lidstrom-- Playing all 20 years of his career with the Detroit Red Wings. Drafted 53rd overall by the Red Wings out of Sweden. A defenseman known for his extreme pride in hard work. Lindstrom became the first European born player to win a Stanley Cup as captain, and first European player to be named playoff MVP. The all-time leader for games played with one team. Lindstrom was a 12 time all-star, 7 time Norris Trophy (best defenseman), and 4 time Stanley Cup winner. He was also named best European player ever by The Hockey News, and NHL player of the decade by The Sporting News and Sports Illustrated.
SUCCESS 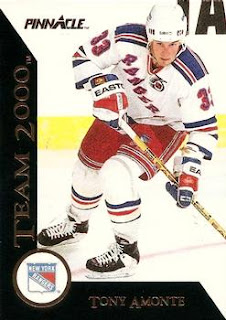 4. Tony Amonte -- Drafted 68th overall by the New York Rangers in 1988. Amonte played 16 seasons with the New York Rangers, Chicago Blackhawks, Phoenix Coyotes, Philadelphia Flyers and the Calgary Flames. Known as a scorer during his years with the Blackhawks, where he had his best seasons. A 5 time all-star, all during his time frame with Chicago. Amonte finished his career with 416 goals, and 484 assists.
SUCCESS 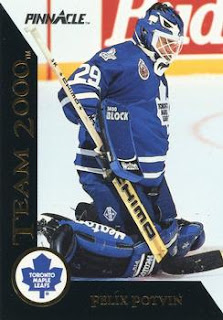 5. Felix Potvin -- Better known by his nickname 'The Cat'. Potvin was selected 31st overall in 1991 by the Toronto Maple Leafs. A great goalie who upon his arrival the Leaf's coaching staff appointed him the starting goalie. The success meant the Leaf's needed to trade current goaltender Grant Fuhr, and they did to the Buffalo Sabres. While his climb to the top was fast his fall was just as fast. In 1998 a knee injury limited Felix to just 5 games in what was now a back-up role to Curtis Joseph. That same season Potvin was traded to the Islanders. Two other trades followed to the Canucks then Kings before signing a one year contract with the Boston Bruins. I have to admit that I am on the fence with this man but with a nickname 'The Cat' I have to say..
SUCCESS 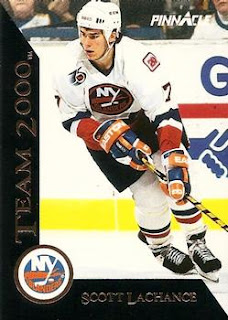 6. Scott Lachance --  The 4th overall selection by the New York Islanders in 1991. Lachance came into the league with high expectaions. A decent defender he played in 819 games during what ended being a 13 year career. During his career Lachance played for four teams New York Islanders, Montreal Canadians, Vancouver Canucks, and Columbus Blue Jackets.
PUSH
Posted by The Prowling Cat at 3:30 PM