As I've posted in the other artelopes postings. The daughter has kind of taken over the artwork. With the Wings she was kind enough to let me do this one. So here's my work.

When doing the logo I had my doubts on whether it would arrive or not. As you can see I put the lacrosse stick through the address. Trying to keep the colors light so you could see the stick but so it didn't interfere with the address.

The Wings are a team in the National Lacrosse League. The league is an indoor league with games running from January until April. Playing their home games at the Wells Fargo Center. The franchise are six time champions in the leagues they have played in. While I haven't seen a game in person the league looks like it'd be a good time. Why I never saw a game when we had the Portland LumberJaxx I will never know. 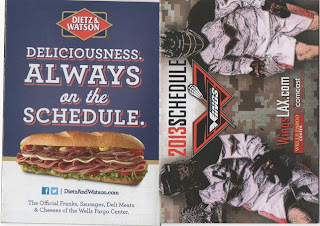 Now that you saw the artelope, and got a small sampling about the team. It's time for my favorite part. The goal of this letter was to get a business card for the collection.
RESULTS
5 schedules
no business card
10 days
Failed return
Posted by The Prowling Cat at 2:18 PM