Although I hit atleast one Goodwill a week. The hobby room has gotten quite filled so finding treasures has become something that happens less often than they did say one year ago. I've even hit the point where a couple months ago some of the bobbleheads from the non Mariners collection made an exit back to Goodwill. It wouldn't be a surprise if it begins to happen more in the future. Things are at the point of if one comes in one has to leave.

I mention this as even the Mariners collection has gotten very tough to add to. While they are still giving out four or more a year it seems. Finding them at the Goodwill has gotten to be much harder than it used to be. All this leads me to finding not only a bobblehead I didn't have, but didn't even know existed. 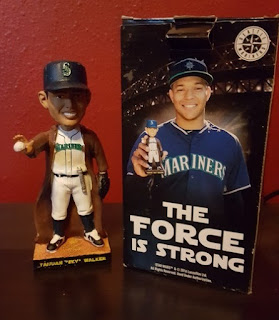 To most the question might be how did you not know this existed being you collect Mariners bobbleheads?  My answer is I don't keep a running list of those missing from the collection. Maybe this should be something that gets done one day, but right now with the schedule collecting, business cards, and baseball cards. Another wantlist to research, and maintain doesn't feel like something fun. Collecting is supposed to be fun, and so I'll wait on doing a bobblehead list.

Due to all the fuss about the eclipse happening tomorrow, and living in the "Totality Zone". I had plans to be one of those that enjoyed all the chaos from my living room. We are planning to head out to the park in town, and watching at the event they have going on. Things have been way less insane than expected so I gave it a go at getting the dogs wet food, and hitting the Goodwill.

I'm glad my attitude changed as this had to be one of my more successful trips in a long time. Starting off the treasure discovery was a pair of bags filled with card sheets. How many were in each bag I haven't counted yet, but will get around to at some point. Most important is these aren't the usual 9 pocket pages. One bag was filled with 4 pocket, and the other 2 pocket. These will be used for the schedules as more, and more colleges are leaving their basketball, and football unfolded. I could fold them, but they are cooler in the 4 pocket pages. The 2 pocket are great for some schedule magnets, and some other odd sized schedules.

The real find though was this goody right here. 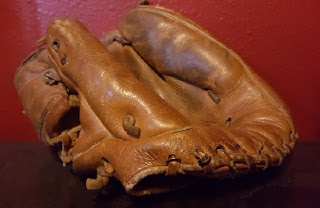 I can't tell how old it is, but for $3.99 it looks cool enough that I'll have a place for it in the hobby room. It even had the old owners name, and part of their phone number that  I can't make out.

The plan is one day to find an old crate or something, and toss it into this with some bats, balls, and maybe another glove or two. Currently I have two bats for the box, and sadly passed on buying a box that might have been perfect a couple months ago. Eventually another will come my direction, and the whole idea will start to build itself. Until then I'll stay on the lookout for new additions.
Posted by The Prowling Cat at 4:32 PM