Back when I was a kid we collected football cards with more of a passion than any other sport. Then as we hit the teen years our football cards disappeared, and any collecting we did was for baseball. Not a whole lot of trading was done, but when it was baseball was king.

Then came the early 90's, and my collecting changed over to basketball, and non-sport. Baseball was a backseat that I would pick up Nolan Ryan cards for myself, and possibly the hottest new thing to sell at an upcoming card show. During this time frame pretty much all my football went to the great abyss. The black hole of I don't know where. I had maybe a couple handful of cards left, and why I had them I can't tell you because I don't even know.

Over these past years baseball has become my only collecting. The basketball cards have been slowly getting tossed into either the recycle bin, or the Goodwill box. On a very rare occasion I've been able to hit a wantlist with them. If it wasn't for those times I'd bet the basketball cards would be a handful. Right now they are the verge of that status, but haven't quite gotten there yet. Non-sport cards have been suffering the same fate as what was once two big boxes full of cards is down to one half box, and shrinking slowly.

All this purging leads me into the reason behind this post. While doing another small basketball purge I came across the small handfuls of football cards. Most of the cards were these type. 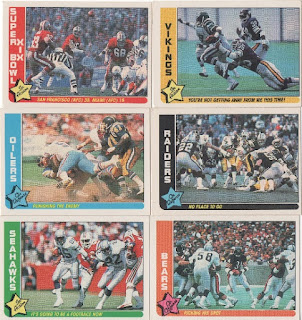 The ever forgotten about Fleer Action Team cards. If you've caught my posts for this entire year you have noticed not only mentions of these cards. You will have seen the pictures from this post already.

During those I have mentioned that a storm was brewing in my collecting habits, and these cards are that storm. Thinking about all the fun with not just these cards, but the football cards from when we were kids got me wanting to do a little football. While I have no interest of hunting down the cards sets of individual players from that time frame. What I am interested in is trying to build these sets once again. 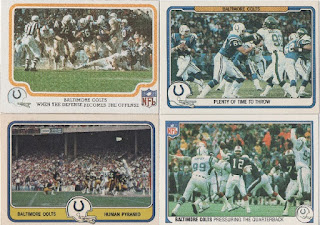 Ironically these are tough finds, and go right along with my baseball sets building of numerous tough to build sets. Luckily I have a really great head start on the 1985 set as it was the one I found in the box of football cards. The bad news is the stickers, and making a wantlist for them will be the toughest part of this journey. To help I know the blog Fleer Sticker Project did some posts about these stickers. Eventually I plan on going through those posts, and seeing about trying to make a sticker wantlist.

Until then I have now added a link on the side under my baseball set wants, and player collecting for these cards. If anyone out there has even one of these I'd love to add it into the collection.
Posted by The Prowling Cat at 8:00 AM